Microsoft Team Foundation Server 2010 does not provide an easy way to run NUnit test as part of the continuous integration process. Some pretty intense work goes into running those unit tests, and even more is required if build success should depend on unit test success.

If the build is set to fail on failed tests, then the entire build will be failed if there are ''any'' test errors or failures.

If the build is not set to fail on test failure and there are failed tests, then the build will be considered partially successful.

Failed tests that cause build failure are Build Exceptions on the Build Summary page.

Failed tests that do not cause build failure a Build Warnings on the Build Summary page.

Detailed output for failed tests can be viewed on the "View Log" link on the Build Summary page.

Following are some highlighted steps that are necessary as part of the process to exercise the NUnit tests in TFS 2010.

1) Determine the test assemblies based on the Test Assembly Wildcard Selector specified in the Build Process Parameters.

The Test Assembly Filespec parameter is used to determine which solution assemblies should be processed by NUnit. This can be modified based on a specific project's needs.

2) Execute the NUnit tests on each test assembly 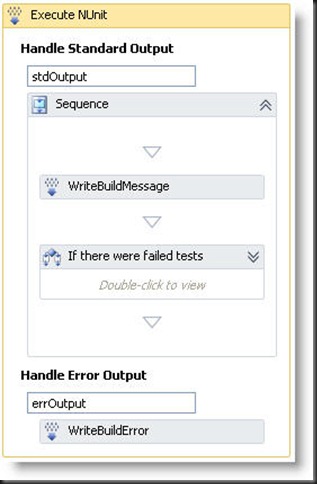 The nunit-console application is called on each test assembly.

The existence of failed tests is determined by parsing the output generated by executing the tests. This output is stored in a local variable. 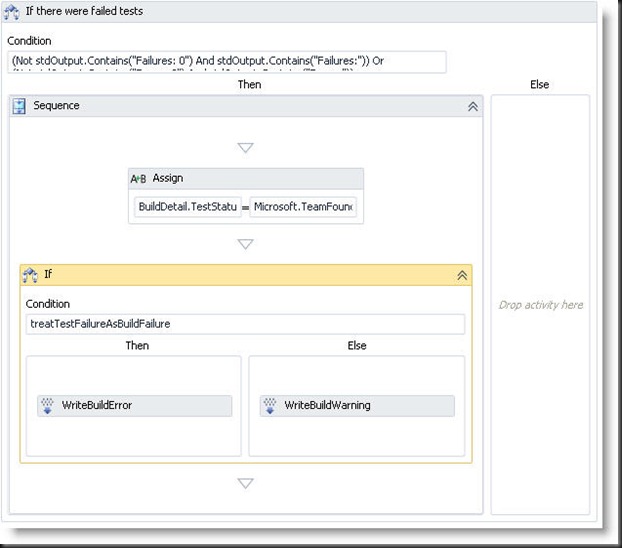 The test is considered failed the following condition is met.

Executing the NUnit tests requires reworking the default "If Not DisableTests" workflow step in the build process template. Build process templates are XAML files. They can be edited in the workflow editor in Visual Studio 2010 or in a text editor. If modified in a text editor, care should be taken to ensure the final product is a valid TFS TeamBuild Workflow XAML file.

To add the NUnit test runner to the default build process template (Download Here), If Control Flow section with the XAML from the attached file. 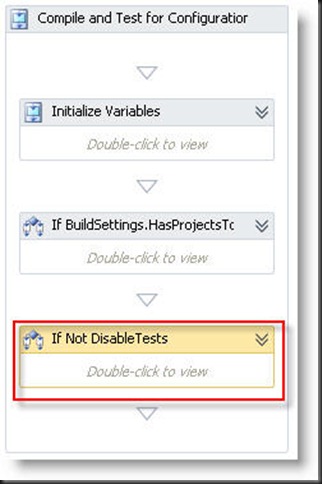 All builds now executed will execute the NUnit tests in place of the standard MSTest test suite.